It’s safe to say 2017 is off to a slow start in terms of painting. At the end of the year, I was enjoying a rare spurt of painting interest, cranking out multiple models per week and really making some progress on the massive pile of unpainted models. With the new year, however, that has slowed down. If I’m honest with myself, its mostly due to analysis paralysis. There are just too many projects I want to work on. So when I sit down to get some work done, I can’t decide what to do.

I’m going to skillfully ignore this problem for now and instead show off some of the models I have been working on. That should inspire me to pick up the paintbrush more often….right?

First up are the demons of hunger that are Malifaux Gaki. Gaki seem to be one of those unfortunate models that every game has….awesome, beautiful models whose rules either suck or they’re too underpowered or over-costed, which means I seldom see them on the table. I picked mine up long before I’d ever played a master you’d use them with, as I just loved the look of them so much. When I selected them for the painting table, it was partially out of a desire to paint the fantastic models, partly to try out some new techniques which I’ll describe later, and partly to avoid having all those fiddly bits destroyed in the purgatory that is my unpainted pile.

In terms of painting Gaki, the first thing you need to do is decide on whether you want light or dark meat. Now I know there’s someone out there who’s painted them pink or yellow or something like that, but….just….no…. Anyway, there are great examples out there of both light and dark Gaki. When I first saw this example pop up on A Wyrd Place, I thought I’d made up my mind. However, sometime after, another set of Gaki popped up on the same page and I was suddenly sold on the lighter version. At this point, I think the scheme I selected for my Gaki is pretty standard, as it just looks like how these models should look. The Gaki I’m referred to were painted by a friendly guy named Johan and can be seen, along with a brief tutorial, here.

Gathering my paints for a ruthless takeover of the scheme, I noticed a problem. Dheneb Stone is one of those older Citadel Foundation paints the come from a time before they started to make everything an IP entangled mess. Like most of this Foundation range, there are colors in other brands that are similar, but there isn’t a dead on match. Worried that I didn’t have enough Dheneb Stone left to complete all three models, I set the old pot aside and decided to come up with an alternative. Where I landed was on a mix of VGC Heavy Wormgrey and  VMA Grey. Heavy Wormgrey is that color I’m talking

about that looks like it is supposed to be a copy of Dheneb Stone but just doesn’t quite match. The mix gave me another benefit in that Heavy WormGrey also has some purple in it, which gave a nice coolness and surreal look to the robes. As I mentioned before, I chose these models because I wanted to get some work in with techniques that I’ve tried but never really practiced, so I set to work slowly layering up the greys with increasing amount of VGC Ivory. I’ll link to Johan’s tutorial again here, because he described exactly the things that make Ivory such a nice color to work with. Since first cracking the bottle for these Gaki, there hasn’t been a model I’ve not used Ivory for.  Anyway, with the robes all layered up and looking pretty, it was time to dirty them right back down. I chose to use Vallejo Umber Wash to do the duty, with an all over shade followed by another into only the recesses. When applied over the Ivory, the effect was pretty much complete and exactly what I was looking for.

As I develop as a painter, I’ve tried to paint one part of a model or group of models first, and then go back to the next part, rather than doing all of your basecoats, then all of your highlights, etc. For me, this keeps me interested in painting and helps me ay closer attention to the colors and combinations I use. However, with the Gaki, in particular with their flesh, it just made sense to do them at the same time as the rest of the robes. When you paint Gaki light instead of dark, the flesh takes on much more of a backseat and was therefor pretty quick to get looking the way I wanted. I started the flesh

with VGA Cold Grey and added just a hint of VGC Sunny Skin Tone, just to make sure the skin looked like flesh. From there, I highlighted much more quickly and messily with increasing amounts of VMA Grey. Once the final line highlights were done on the knuckles and ribs, I subjected the skin to the same Umber wash, though I didn’t let much build up on the skin. I followed that with another wash, which time Umber and Secret Weapon Amethyst, which gave the skin that sickly look. Finally, the gums of the horrible creatures and the tips of their fingers were washed again, this time with Secret Weapon Ruby.

Then it was time to dirty the little bastards up. For the weathering I used Vallejo Game Effects Dry Rust. First I flicked the effect on with an older stiff brush for the irregular mud speckles. Once this was dry, I went back with two brushes for the main weathering on the robes. I first applied the effect with a wet brush just at the very bottom of the robes and in the deepest recesses, going back with a dry brush and pulling the excess paint up the model. At the same time, I returned to the fleshtone I had used earlier and gave it a healthy helping of VGC Purple, followed a mix with Ivory again that gave me the basecoat on their tongues.

This left only the teeth and nails of the Gaki remaining. I had decided early on that I liked the idea of metallic claws and teeth on these things. They just look more nightmarish than regular teeth or claws and they don’t take away from the focus of the model, which should really be that giant mouth. They started with a basecoat of Vallejo Metal Burnt Iron, a quick Umber wash to bring down the shine, and were finished off with a highlight Vallejo Metal Steel.

After basing, I went back to the Gaki with some Citadel Blood for the Blood God and added it to their tongues, in their mouths, and some on their robes. Now let me just say here that I, like everyone else I know, am a huge fan of BftBG, but this stuff can be dangerous. In my first round, I added just too much and the poor Gaki started to look cartoony. I stepped it back considerably, but I’m still not sure I’m totally happy with how the effect turned out. Careful with the Blood for the Blood God people… 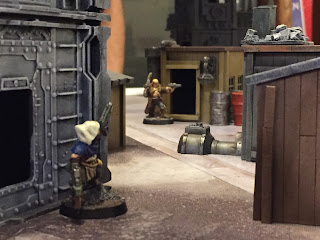 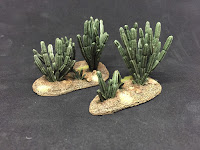