Showing posts from June, 2012
Show all

A Lot Has Been Going On (or) Yes. I Actually Played Malifaux 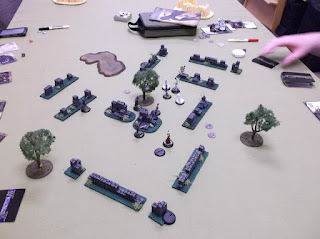 With my work now becoming increasingly busy and stressful,  I have found myself going out of my way to find time for hobbying. It really is a good way to blow off steam, particularly if you aren't interested in drinking (more) regularly. And dig this...I've actually been playing! In fact, over the last few weeks I have painted multiple models, played at least half a dozen games of Puppet Wars and two games of Malifaux against three different people.

I've actually played some games recently. The picture is from a game I played over the weekend with WaywardSun13. His blog, The Way of the Brush showcases a lot of his very nice models. We played Shared Line in the Sand, Viktorias vs Seamus.

With only a handful of games under my belt, I have to grasp the concept of playing to the objective. So far, I just do a lot of making up stuff as I go and thinking about winning the game later.

It was nice to see the Viks run against me though. I had originally chosen them as the crew I w…
Post a Comment
Read more
More posts